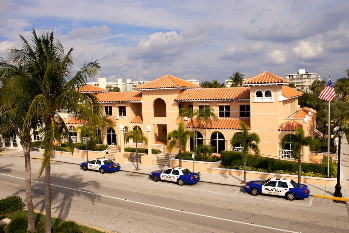 The Palm Beach Police Department is organized into components which are grouped according to the functions they are designed to carry out. Levels of authority and responsibility within these components are established by rank and position. The order of command for sworn personnel is: Chief of Police, Major, Captain, Lieutenant, Sergeant, and Police Officer.

The Professional Standards Lieutenant conducts inspections and investigates complaints assigned by the Chief of Police. The Lieutenant is responsible for ensuring that all employees meet professional and ethical standards of conduct both while performing their official duties and in their personal lives.

Complaints may be received in person, via written correspondence, telephone calls, or anonymously.  Please call (561) 838-5454 and ask to speak with the Patrol Commander on duty or download the Citizen Complaint Form for further instructions.