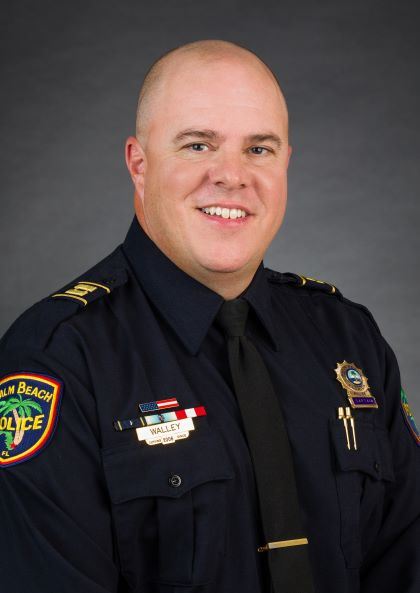 Captain Gary Walley joined the Palm Beach Police Department on March 13, 2006 and received the Academic Award of his graduating class in the Police Academy.  He served in the Patrol Unit as a Patrol Officer, Police Diver on the Underwater Search and Recovery Team, Bicycle Officer, ATV Operator, Marine Unit Boat Operator, Field Training Officer and as a Detective in the Criminal Investigations Unit (Organized Crime Vice and Narcotics) before his promotion to Sergeant in 2015.  As a Sergeant, he served in the Patrol Unit, was a Field Training Officer Supervisor, and oversaw the Organized Crime Vice and Narcotics Unit within the Criminal Investigations Division until his promotion to Lieutenant in 2019.  As a Lieutenant, he served in the Professional Standards Division, served as the Watch Commander for Patrol, and oversaw the Criminal Investigations Unit.  He was appointed to the rank of Captain in May 2022.

Captain Walley has received 28 Level 1 Department commendations, two Level 2 Commendations, the Life Saving Award and has been designated the Department’s Officer of the Month twice.   He is the recipient of the Sons of American Revolution Commendation Medal and the recipient of the Kunkel Award.   He has served the Department as a member/supervisor of the Equipment Committee, Training and Safety Committee, Recruiting and Retention Committee, and the Use of Force Committee.  Captain Walley currently oversees the Underwater Search and Recovery Team, Marine Unit, and the Drone Unit.